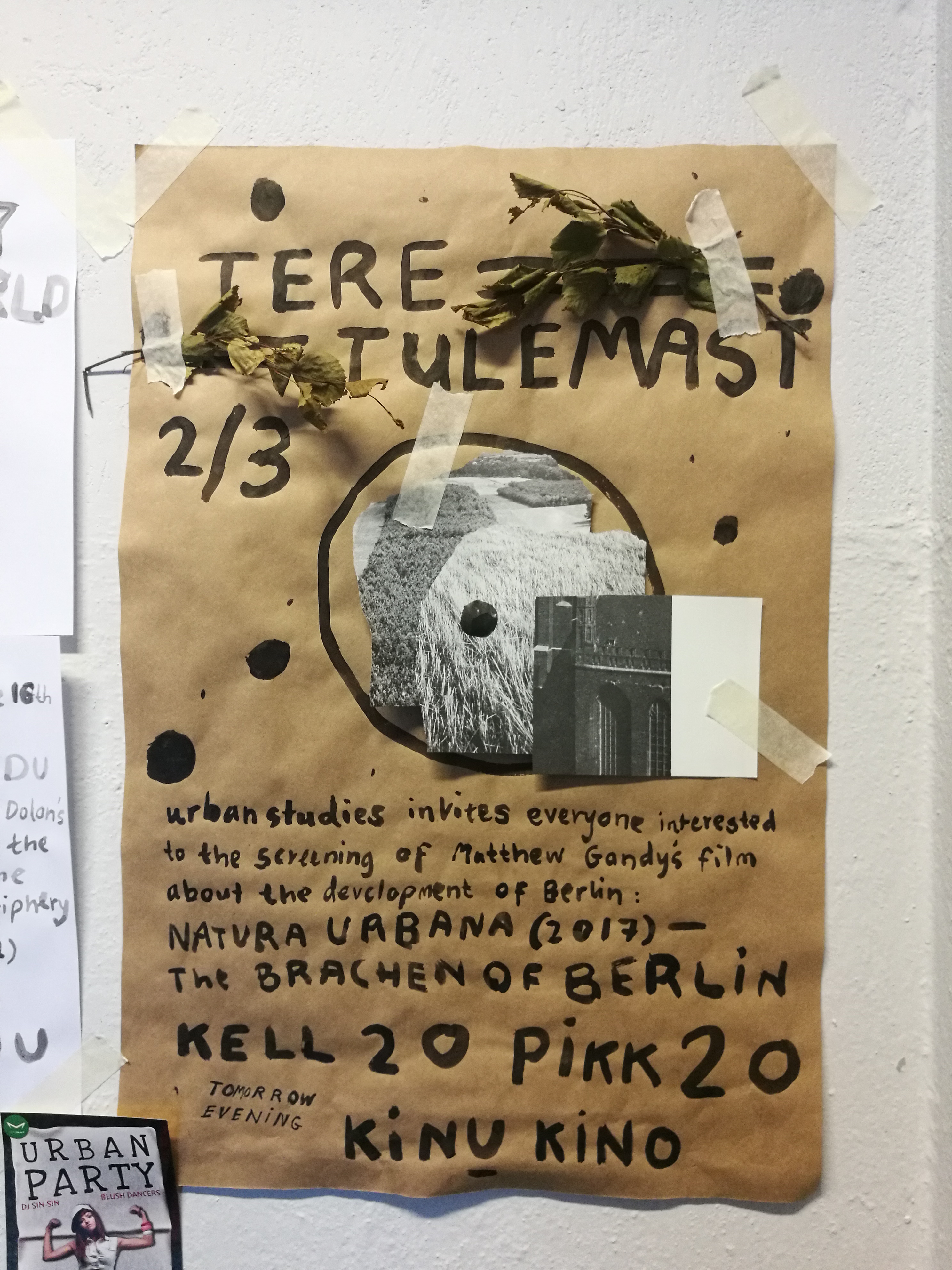 Why make a film about wastelands or Brachen as they are referred to in Berlin?  I’ve long been fascinated by urban landscapes, and especially the marginal spaces, brimming with life, that characterise many cities.  Somehow these “accidental gardens” are so much more interesting than the designed and manicured forms of urban nature that characterize pervasive landscapes of speculation, function, and control.

At key moments in its history the landscapes of Berlin have been radically transformed to produce an array of unusual or unexpected biotopes:  the post-war years were dominated by strange rubble landscapes that became a focus of intense cultural and scientific interest; the geo-political division of the Cold War years transformed the “island city” of West Berlin into an intense experimental zone; and with the fall the Wall in 1989, a series of new void spaces were produced among abandoned buildings and along the former “death strip”.

In Natura Urbana I conceive of Berlin as a living book where every street corner is a potential part of our story.  The film is divided into a series of chapters that are loosely chronological but also highlight a number of interconnecting themes such as the changing meaning of public space, the role of ecological knowledge in urban politics, and way in which marginal spaces have served as a source of cultural and scientific inspiration.  In particular, I have wanted to give a sense of the interplay between cultural and scientific aspects to urban nature, and develop a “double history” that weaves together changes in Berlin’s landscape as well as the wider geo-political context that has produced such distinctive spaces.   Our protagonists featured in the documentary draw on a mix of experience including teaching, writing, activism, and scientific studies; they are all people whose thinking has been profoundly shaped by the marginal spaces of Berlin.  Natura Urbana captures a distinctive period in the city’s history, that broadly spans from the post-war era to the most recent phase of intensified construction activity, in which many of these fascinating spaces are rapidly disappearing, a process that has gathered momentum over the last few years: some of the sites that we filmed in 2015 have already been lost.

But what is an urban landscape anyway?  Even a cracked pavement or neglected parking lot, with its own ecological dynamics, can serve as a kind of small-scale landscape beloved of urban botanical excursions.  The idea of landscape is very much connected to the human sensorium, the sense of intrigue or exhilaration experienced by unfamiliar spaces, and also the role of distinctive vantage points such as bridges, buildings, or even aerial perspectives.  In Natura Urbana, however, we are often immersed in the multi-sensory dimensions of close encounters including the distinctive acoustic landscapes of the city.  There is an attention to the details and textures of space, including individual leaves, material fragments, or the jewel-like appearance of insects in the urban fabric.  These fleeting moments also belie my own presence in these spaces as a geographer and urban field ecologist who has studied some of the sites that appear in the film.

In making Natura Urbana I have been very fortunate in receiving funding from the European Research Council, which carries a certain obligation for me to reach out to a public audience beyond the academy.  The challenge, therefore, has been to craft a film that is intellectually rigorous yet accessible to a wider audience.  I have also worked with an outstanding team of collaborators who have brought their own expertise to the project, whether in terms of aesthetic contributions such as sound design or meticulous archival research to uncover fascinating traces of the city’s past.