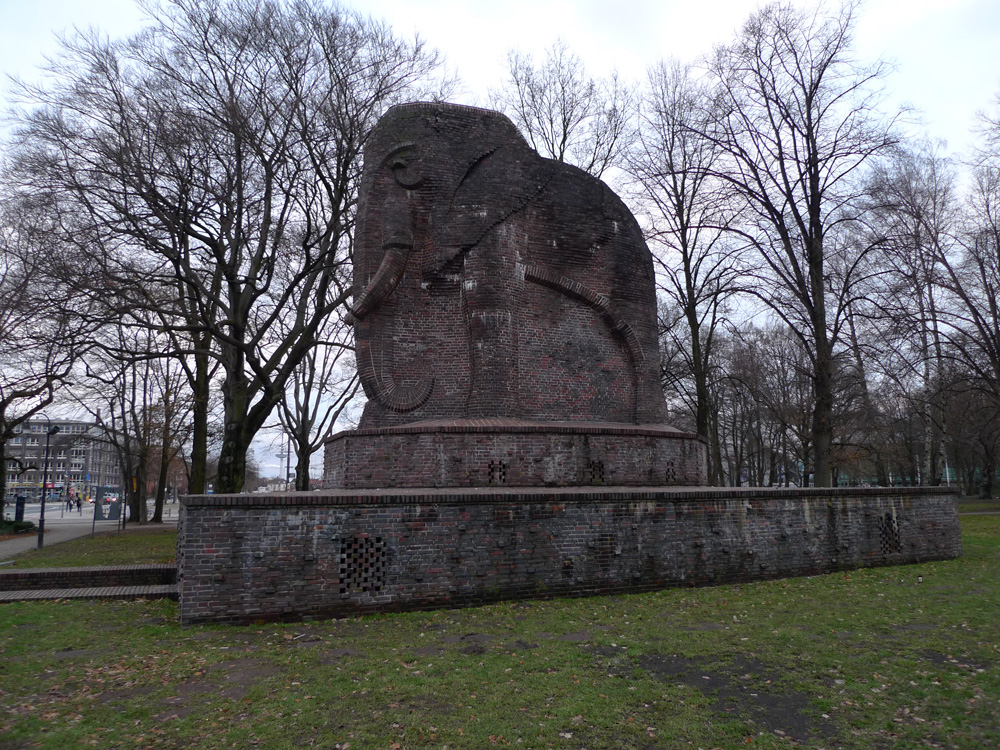 Near the centre of the northern German city of Bremen is a large elephant made of bricks. This imposing ten-metre high structure — designed by Fritz Behn — was completed in 1931 as a monument to the German colonies which then included Cameroon, Togo, Deutsch-Ostafrika [Tanzania], Deutsch-Südwestafrika [Namibia] and several islands. For decades the “Reichskolonialehrendenkmal” stood as a powerful symbol of German colonial ambition that spanned both the Nazi era and the post-war period of reconstruction: an aesthetic continuity that stands in sharp contrast to the hurried erasure of the DDR.

In 1988, however, a metal sign was created next to the elephant by the youth wing of the Bremen metal workers union in support of the Anti-Apartheid movement. In 1990, with the celebration of Namibian independence from South Africa, the elephant itself was re-dedicated as the “Bremen anti colonial monument” thereby attempting to invert its historical meaning yet retaining the original design. And in 2009 a new monument was created next to the elephant to the victims of German genocide: between 1904 and 1908 over 70,00 of the Ovaherero, Nama and Damara peoples of Namibia were murdered followed by an intensified phase of racial segregation that pre-figured the development of Apartheid in South Africa. In contrast to the elephant the genocide memorial adopts a more abstract design reminiscent of land art or street installations: a horizontal array of simple elements such as rocks and stones in the place of vertical bombast.

This assemblage of memorials and plaques reveals that the German colonial presence in Africa was not a minor element in European history: we now know that many of the perpetrators of early twentieth-century violence in Namibia and elsewhere would go on to play a significant role in Nazi expansionism in Europe. In the place of the Herero were the Slavs and others to the east, where an envisioned settler landscape bore parallels with European sequestration of fertile lands in Africa. What is especially interesting about Bremen’s elephant is that it poses the possibility for changing the meaning of public monuments: it allows remnants of the past to become incorporated into new understandings of history. How many other elephants remain unnoticed or unchallenged in European towns and cities?