At the BFI Southbank today I had the chance to see Alexander Dovzhenko’s rarely shown silent film Earth [Zemlya] accompanied by live piano music. Made in the summer of 1929 in rural Ukraine the film opens with a swirling sea of wheat that is reminiscent of Terrence Malick’s Days of heaven (1978). This is followed by a series of delicate images of human faces, sunflowers and apples. The low position of the camera lends the human faces a “heroic quality” outlined against the vast sky.

The core theme is the coming collectivization of Soviet agriculture centred on the arrival of the first tractor — the “iron horse of Bolshevism” — and the latent tensions between peasants and kulaks. For contemporary Stalinist critics, however, Earth was not considered political enough and Dovzhenko was widely vilified for his lyrical and sensuous vision. By the film’s release in 1930 the brutal aspects to collectivization were becoming increasingly apparent and the idyllic landscapes depicted in Earth were to become spaces of devastation.

In the closing scenes we see apples, melons and pumpkins in the rain. Yelena, the bereaved wife of the young farmer Vassili, has found a new lover. And the poetic qualities of the film leave us to reflect on time, nature and the yearning for a “new life”. 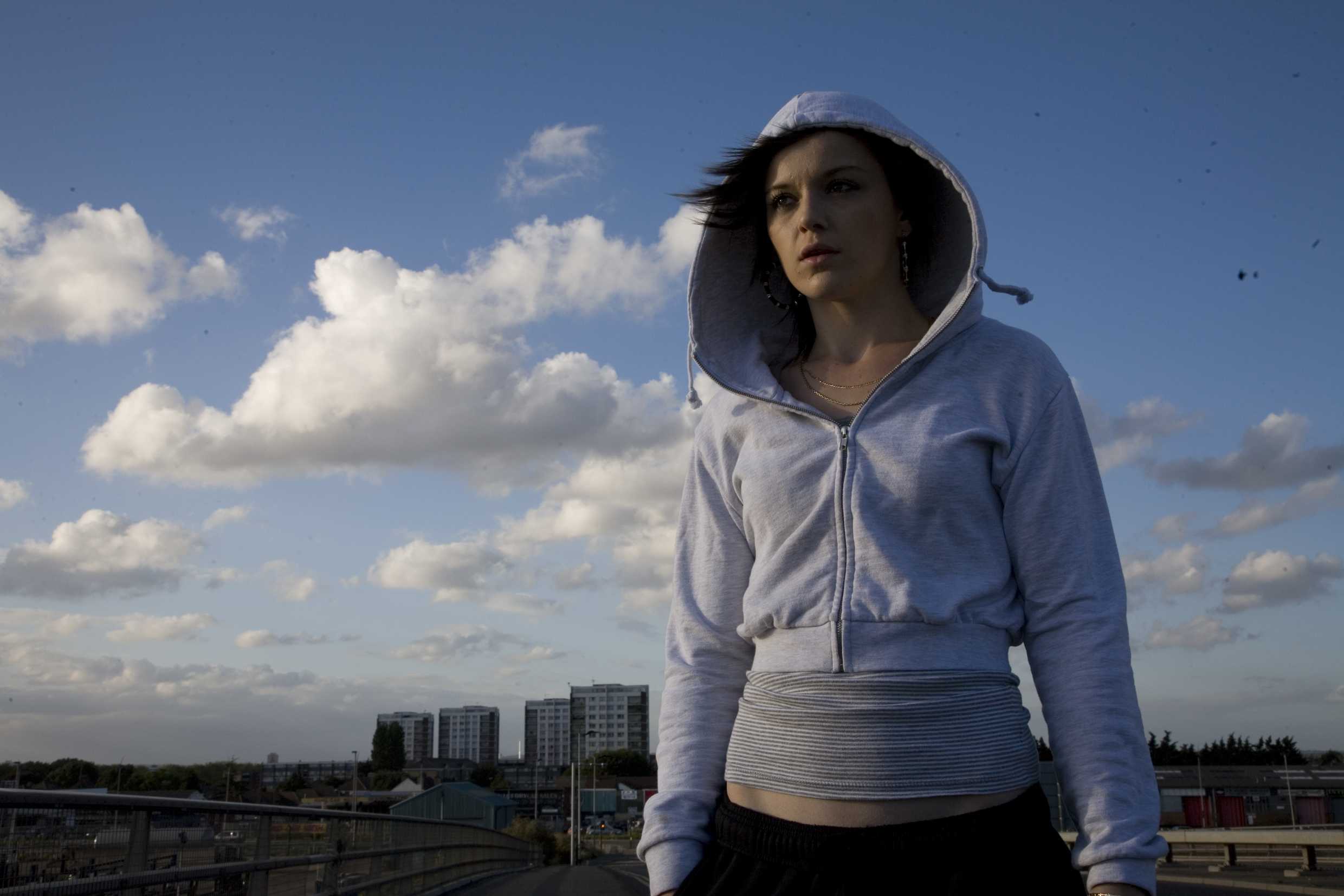 In Andrea Arnold’s extraordinary film Fish Tank, first released in 2009, we encounter the landscapes of Rainham on the London/Essex border experienced largely through the eyes of fifteen-year old Mia, played to incredible effect by the unknown actor Katie Jarvis, who was apparently spotted by the casting agent on a railway platform. Though Rainham is not quite an explosive banlieue in the French sense it is nonetheless portrayed as a space of intense social and cultural marginality.

In Fish Tank Arnold builds a profoundly claustrophobic mood that is matched by an oppressive “edge” landscape of utilitarian functionality dominated by highways, pylons and superstores. In perhaps the most striking scene, however, Mia, along with her mother, her younger sister, and her mother’s new boyfriend, enter a hidden space of “wild urban nature” where they encounter the beauty of nature, symbolized by the fleeting appearance of a blue damselfly by the edge of a small lake.

Arnold may well be the most exciting contemporary British film director. There is an enigmatic dimension to her work — also reflected in Red Road and the short film WASP — that builds a sense of emotional complexity and unpredictability. Her cinema attains a certain kind of vivid realism that is rooted in an uncompromising corporeality combined with an exploration of the inner foment of her cinematic protagonists. 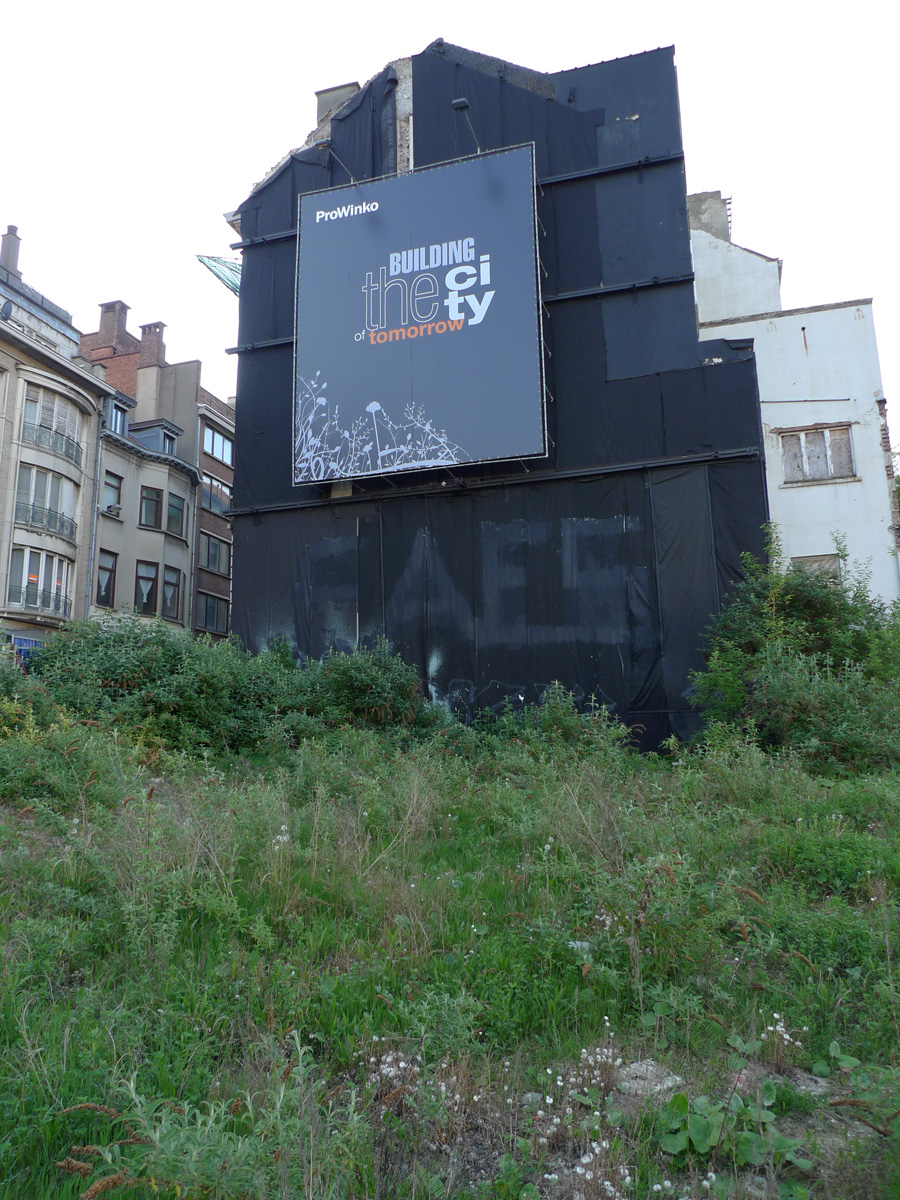 A couple of weeks ago I attended a conference in Brussels and was intrigued by an “empty space” just next where I was staying in the centre of the city. Bordering the busy Avenue de la Toison d’Or is a large plot of land — overlooked by billboards announcing the imminent “city of tomorrow” — that is currently a jumble of rubble and weeds fenced off from the rest of the city. Having climbed through the wire mesh on a bright Sunday morning I wondered whether this might be the kind of space that the Spanish architect Ignasi de Solà-Morales has termed terrain vague.

In an essay published in the collection Anyplace, Solà-Morales sets out his definition of terrain vague in some detail. He begins by locating the concept within the history of urban photography:

“Empty, abandoned space in which a series of occurrences have taken place seems to subjugate the eye of the urban photographer. Such urban space, which I will denote by the French expression terrain vague, assumes the status of fascination, the most solvent sign with which to indicate what cities are and what our experience of them is.”

Having explored the origins of the word vague and its “triple signification” as “wave”, “vacant” and “vague” he then adds:

“Unincorporated margins, interior islands void of activity, oversights, these areas are simply un-inhabited, un-safe, un-productive. In short, they are foreign to the urban system, mentally exterior in the physical interior of the city, its negative image, as much a critique as a possible alternative.”

And then a few paragraphs later the crucial sentence that seems to capture perfectly the essence of this plot of ground in Brussels:

“When architecture and urban design project their desire onto a vacant space, a terrain vague, they seem incapable of doing anything other than introducing violent transformations, changing estrangement into citizenship, and striving at all costs to dissolve the uncontaminated magic of the obsolete in the realism of efficacy.”

The concept of terrain vague seems, however, to be overwhelmingly visual in its scope. It is difficult to connect the essentially aesthetic response of Solà-Morales to a consideration of how such anomalous spaces appear and disappear within the city and how they might connect with or illuminate wider processes of urban transformation. In the case of the Brussels quarter of Ixelles/Elsene this is an area that is undergoing rapid change: a vibrant predominantly Congolese community is being gradually squeezed out, house by house, to enable a new kind of “international city” to be created. In fairness to Solà-Morales his concept is rooted in the history and theory of urban photography but how do images intersect with urban theory? And what can “territorial indications of strangeness” — to use another phrase of Solà-Morales — actually reveal about the urban process? It may be that terrain vague cannot easily be used in isolation and is best considered as one of a number of interesting terms that adds to the lexicon of urban thought. And of course there is a contradiction to my response to Solà-Morales since I am also wandering around the streets of a city I hardly know with a camera in my hand. 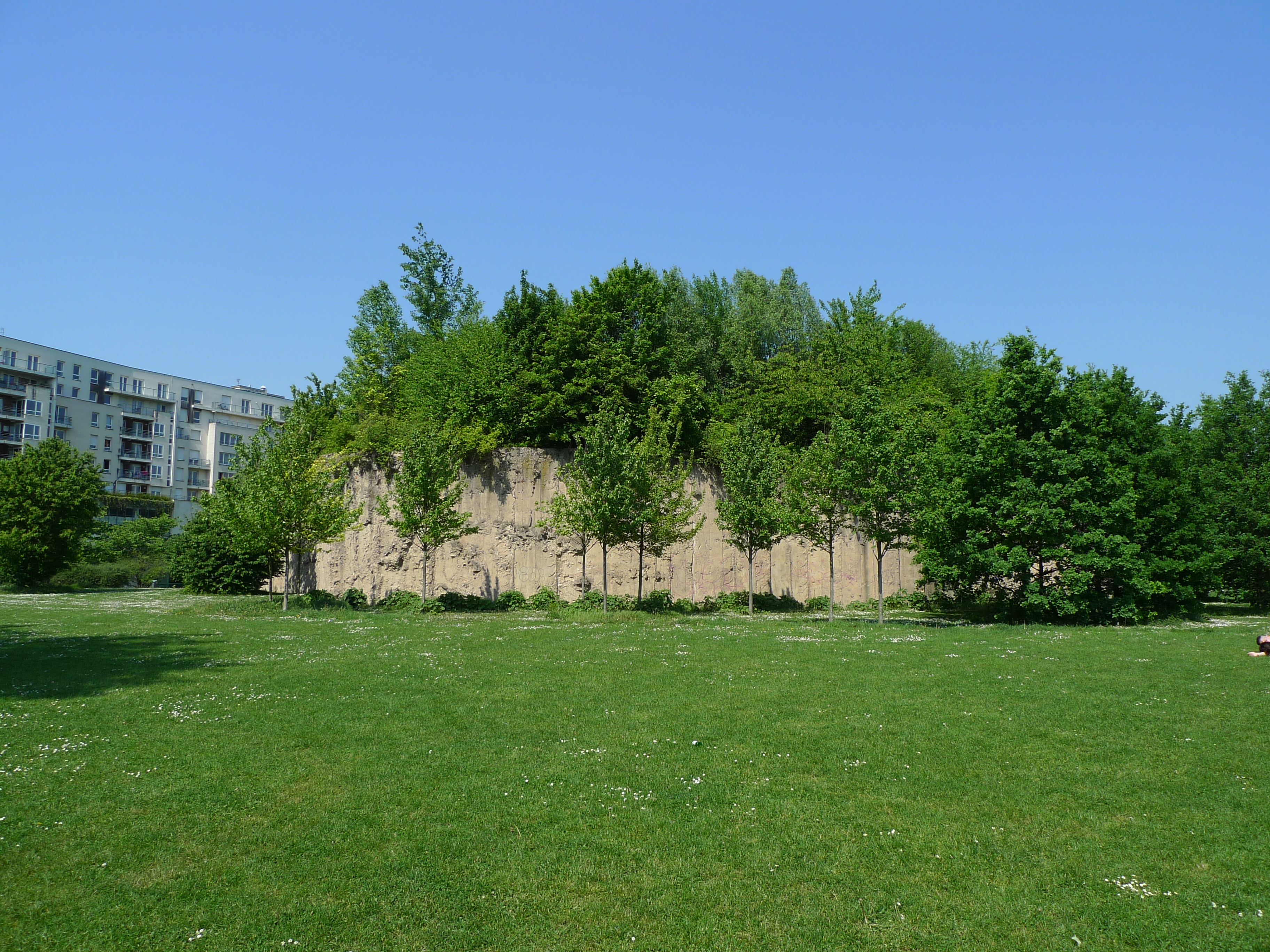 A few days ago I emerged from Lille eurostar station and stepped into one of the most interesting parks in Europe. Completed in 1995 as part of the vast Euralille project, Parc Henri-Matisse combines an expansive open field with a raised island at its centre. The eight hectare park was designed by the French horticulturalist and landscape architect Gilles Clément, who has been at the forefront of recent attempts to include the spontaneous dynamics of nature in urban landscapes. Since the 1970s Clément has been studying the aesthetic and scientific characteristics of spontaneous ecological assemblages such as fallow land to explore how these “gardens in movement” might be incorporated into the design of parks and gardens. A key concept he has advanced is that of the “third landscape” which includes all those spaces that lie outside of cultivation or direct human use and are often important for the maintenance of biodiversity. In Parc Henri-Matisse the idea of the “third landscape” has been put into practice through the creation of an artificial island that will serve as a long-term refuge for urban biodiversity. Clément has named this structure Derborence Island after a fragment of primary forest in Switzerland that has survived virtually intact over thousands of years because of its remote location. Similarly, in Parc Henri-Matisse the central island has been made completely inaccessible like a vast sculpture or enigmatic monument. The oddity of this overgrown concrete block has not been without its critics, however, who have derided its presence as a form visual intrusion that is antithetical to conventional conceptions of public space.

My impressions of the park in blazing May sunshine are that it is quite heavily used, especially by young people, couples and people on their own. The concrete island is surrounded on two sides by a semi-wild landscape of trees and small clearings, which provide a lush contrast with the more open formality of the grassy expanse to the south. The question whether the island really does serve a direct role in maintaining urban biodiversity is not yet certain and its purpose is perhaps more symbolic than ecological. If over time, however, a unique ecological assemblage really does emerge on top of this concrete plinth then perhaps the cultural and scientific aspects to the park’s design will begin to elide more closely. In fact, this may already be happening: just below the island I stumbled across a rare beetle, the bee-mimicking Trichius zonatus, that may conceivably be among those creatures whose urban presence is now being sustained by Derborence Island. 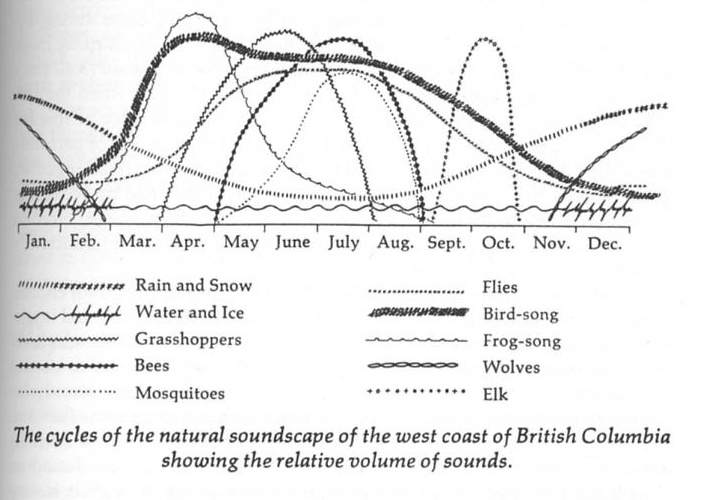 In his extraordinary book The soundscape: our sonic environment and the tuning of the world, first published in 1977, the Canadian writer and composer Murray Schafer exhorts us to listen more carefully to the world. He introduces an “acoustic ecology” that combines everything from history (the changing experience of sound) to physics (the properties of sound itself). His book is arranged very systematically with numerous diagrams as if to suggest that all aspects of sound can be brought within a framework of scientific logic. Central to his thesis is the claim that through understanding sound we can make better sense of human societies in all their complexity. More recently, the cultural theorist Stephen Connor has written of the “modern auditory I” to underline how sound connects with our sense of identity to produce “the sonic self”. Connor and other theorists show us how the presence of sound is constantly reconfiguring space and blurring boundaries.

At Cafe Oto in Dalston last Sunday I listened to a performance of electronic music featuring a series of leading musicians and sound artists: BJ Nilsen, Stephan Mathieu and the TSU duo of Jörg-Maria Zeeger and Robert Curgenven. TSU began with an unobtrusive hum that gradually built up to a frightening swell of sound that was at times simply deafening. I occasionally covered my ears and feared for my internal organs but convinced myself that extreme sound has its place in the pantheon of acoustic experience. Second on stage was BJ Nilsen who uses juxtapositions of music and ambient sound to create complex textures that often invoke very specific locales or fragments of memory. His material featured elements from his excellent album The invisible city that includes musical instruments combined with other sound sources such as amplified objects, bees and crows. Finally, Stephan Mathieu presented an intricate layering of harmonic landscapes. Using a combination of early instruments, obsolete technologies and freeform experimentation derived from abstract expressionism, Mathieu created an ethereal soundscape as different chord formations drifted in and out of focus. In contrasting ways all three performances explored the edges of contemporary sound and produced an experience that seemed an oddly appropriate cultural echo from east London to the prestigious Wigmore Hall north of Oxford Street where Beethoven, Shostakovich and Debussy were being played on the same evening. As I stepped out into the dusty street after the show I was immediately conscious of the noise of traffic, human voices and precisely the kind of complex soundscape that is incessantly around us.