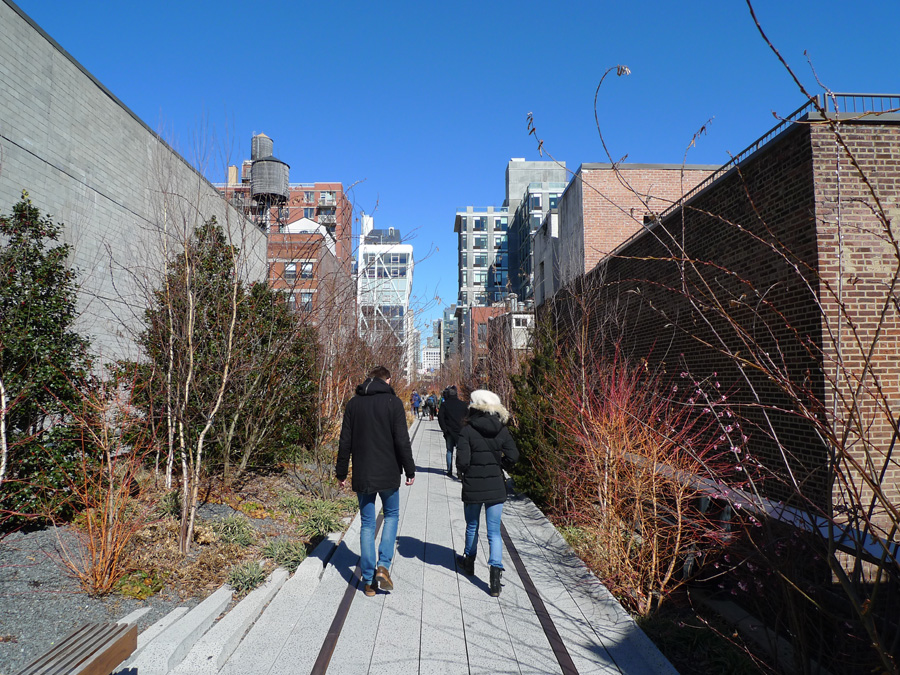 Yesterday I had an opportunity to visit the much discussed High Line for the first time. Designed by James Corner Field Associates, Diller Scofidio and others, this new park has received extensive attention as a project that manifests significant aspects of “landscape urbanism” and the re-use of derelict spaces and structures. Under a clear blue sky I ascended the steps at the intersection of 14th Street and 10th Avenue and entered the park. The landscaped walkway serves as a kind of promenade, mostly for well-heeled Manhattanites and curious overseas visitors, and extends up to 30th Street where we abruptly encounter the more familiar post-industrial spaces of the city. Park signs indicate an extensive list of benefactors for the project along with draconian rules for park use. The vegetation itself is for the most part cordoned off with numerous signs to prevent human contact. I asked a warden what he thought about the park and he described it as a “work of genius”, adding that the entire space is not only closed off at night but also overlooked by CCTV. Unsurprisingly, there has been little damage or disruption from visitors, who comport themselves with care as if wandering through the atrium of a museum.

The park, which opened in 2009, has been constructed along a disused section of elevated railway in Manhattan, and recreates aesthetic aspects to pioneer-stage vegetation through the re-planting of birch trees and other flora to produce a distinctive kind of ecological simulacrum of what occurred on the derelict structure before its extensive landscaping. In this instance, the “wasteland as artifice” becomes a cultural institution that serves to underpin real-estate speculation, and the boundary between private and public is reworked in the form of a “neo-pastoral” urban vision.1 As for the purported ecological saliency of the park — as evidenced by the inclusion of various environmental art works — it turns out that features such as the park benches are produced from tropical hardwoods that have wreaked environmental devastation elsewhere.2

The High Line marks a new phase in the production of metropolitan nature but also signals a degree of continuity with earlier approaches to park design such as Olmsted or Alphand. The modern park, in this context, is a designed fragment of nature that inscribes social and political power into the urban landscape. The High Line is an outward manifestation of the intensified gentrification of New York — it does not represent an alternative to contemporary urbanism but its green-tinged apotheosis.