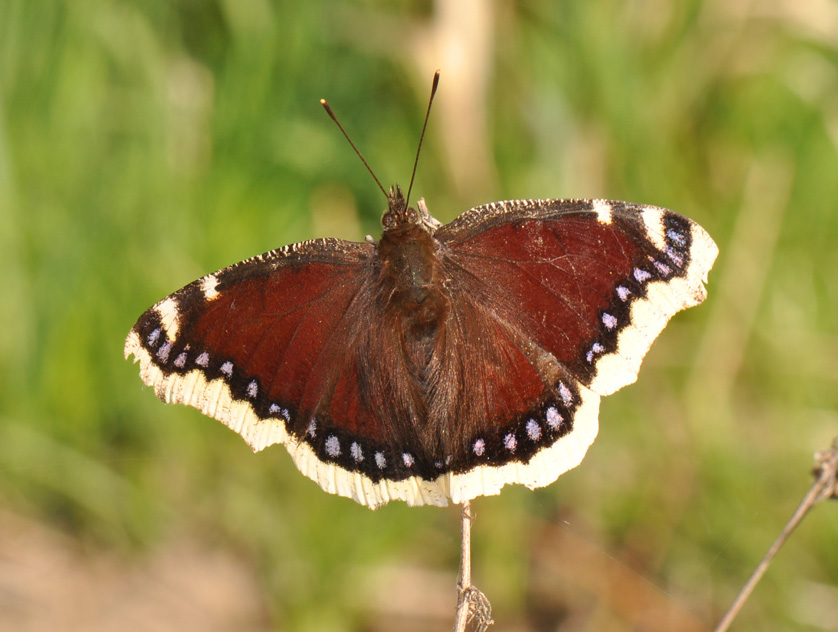 Feeling the glimmer of January sun this morning I recalled one of my most vivid memories of last year. On the morning of Saturday 29 March, at just after noon, I cycled past a favourite spot amid the woods and waterways of Spreewald, a biosphere reserve that lies about 100 kilometres south-east of central Berlin. As I passed the point where two canals meet, next to towering ash and poplar trees reaching up into the sky, an unmistakable butterfly swooped up into the air: a Camberwell Beauty, Nymphalis antiopa, which owes its English name to an early sighting in 1748, in what is now part of South London. I stopped my bike and frantically assembled my camera in time to take a bad shot of the butterfly sunning itself on the track some ten metres behind me before it took off over the trees. At least I had proof of having seen it but otherwise only a blurry likeness. I waited maybe an hour in the vain hope that it might reappear but there was a strange stillness in the March sunshine and nothing was to be seen.

The next day I approached the exact spot again, at precisely the same time, riding my bike quite slowly: to my delight I could see that the Camberwell Beauty was already there several metres ahead of me so I made another stealthy attempt to take a photograph. Again it soared upwards at my approach only to reappear a few minutes later further down the track, now being pursued by another Camberwell Beauty, flying even faster. The two butterflies took off together, spiralling around each other, higher and higher, way above the treetops, until they were a mere pair of specks in orbit silhouetted against the sky.

I stood by the track and waited patiently, camera in hand. About twenty minutes later I happened to glance to my left. A Camberwell Beauty sat sunning itself on a warm twig jutting out from dead vegetation, this time just a few metres away. I edged towards it and this time it did not fly away. Evidently the strange creature advancing towards it no longer seemed to present a threat; I had made a temporary connection with their world.