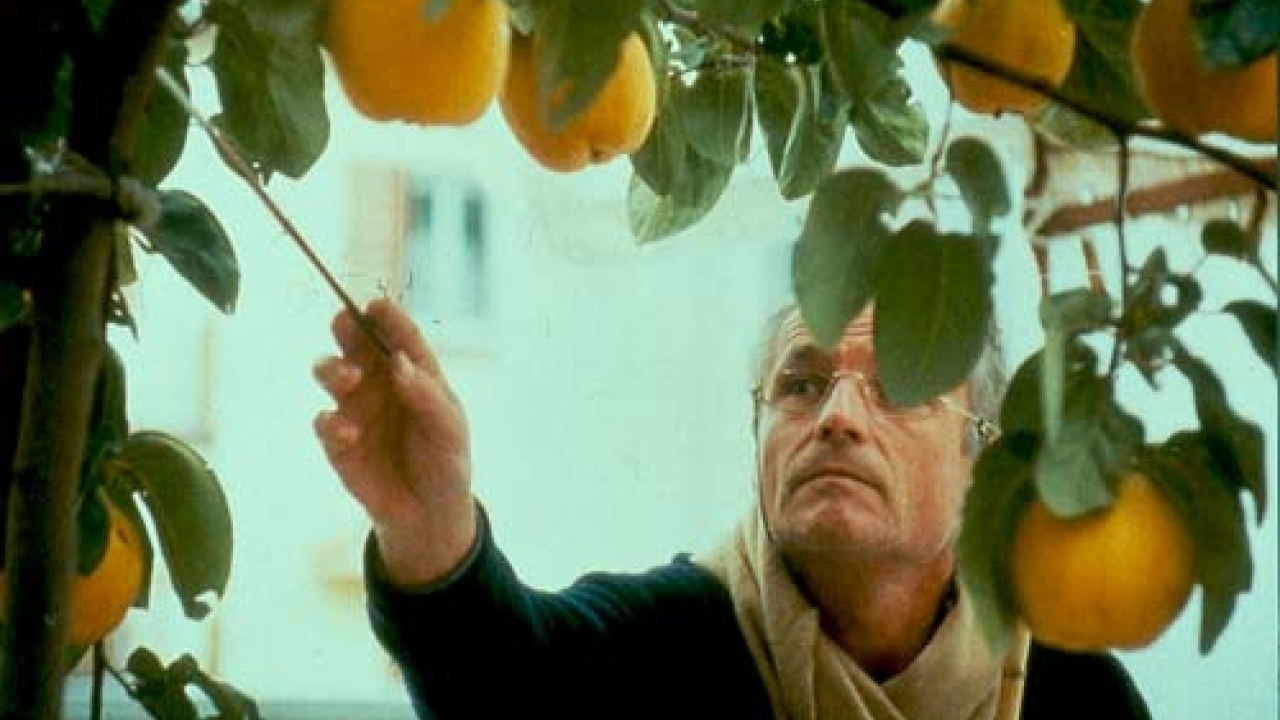 Víctor Erice’s documentary El sol del membrillo [The quince tree sun] (1992) is a simple idea: we follow the artist Antonio López Garcia’s attempt, during the autumn of 1990, to paint a quince tree in his back garden. The film seems to emerge quietly in real time on a late September morning as we see the artist arranging his canvas and inspecting the tree; the only sounds are largely ambient, the rumble of a train, a radio playing and incidental moments like removing the stopper from a bottle of turpentine. With gentle time-lapse photography we observe the emerging canvas over coming days; preparation, patience and detail are interspersed with reminiscences with an old friend who comes to visit. Together, they marvel at the beauty of the tree: the shape, the colours and the fullness of the fruit. Garcia is consistently perplexed by small variations in sunlight and the fact the tree itself is changing over time: he paints small white markers on the leaves and fruit to trace changes in the shape of the tree and the gradual sinking of the branches under the weight of the ripening fruit. “I follow the tree,” he remarks, but the weather worsens, the sky is overcast and his sense of frustration grows.

It is late October and we see the stairwell in his house illuminated with light, set to the music of Pascal Gaigne — very little incidental music is used in the film but it drifts through specific scenes to mesmerizing effect. Garcia has now abandoned his attempt to paint the tree and switches to a drawing instead which he refers to as “a map of the tree”. He contrasts his approach with other artists who work from pictures or photographs since he wishes to avoid “aesthetic games” and struggle directly with the impossibility of representation. By mid-November Garcia describes the tree as being in “full decadence” and he picks up the first fallen fruit on the ground and smells it; the leaves of the tree are now beginning to yellow with small blotches and imperfections spreading. “It’s over,” he declares, and he collects up his things, leaving the garden strangely empty for the first time.

Garcia now poses for another artist, his wife María Moreno: he lies on a bed observing a cut crystal and falls into a deep sleep disturbed by vivid dreams. We see shots of Madrid at night: flickering television screens and moving traffic are interspersed with a bright moon and drifting clouds revealed in all their detail. He narrates a strange dream where he is standing with many others and sees his quince tree now transposed somewhere else. We see the tree next to a camera, the fallen fruit lying under the glare of a powerful light. “Dark spots slowly cover their skin in the still air…Nobody seems to notice the quinces are rotting under a light…turning into metal and dust”. And then the garden is shown next spring with shrivelled and misshapen fruit lying beneath the tree but new buds becoming visible on the branches.

This is a remarkable film of almost unimaginable subtlety that emerges from an intense encounter between an artist and his struggle to convey what lies in front of him. In the end it is time and light that defeat him: the growing tree is itself impossible to capture effectively and every small play of light continually transforms the appearance of the tree. Of course this is not a documentary in the conventional sense but something far more interesting: an exploration of the intersection between an outer world of beauty and decay and an inner world of dreams and imagination.