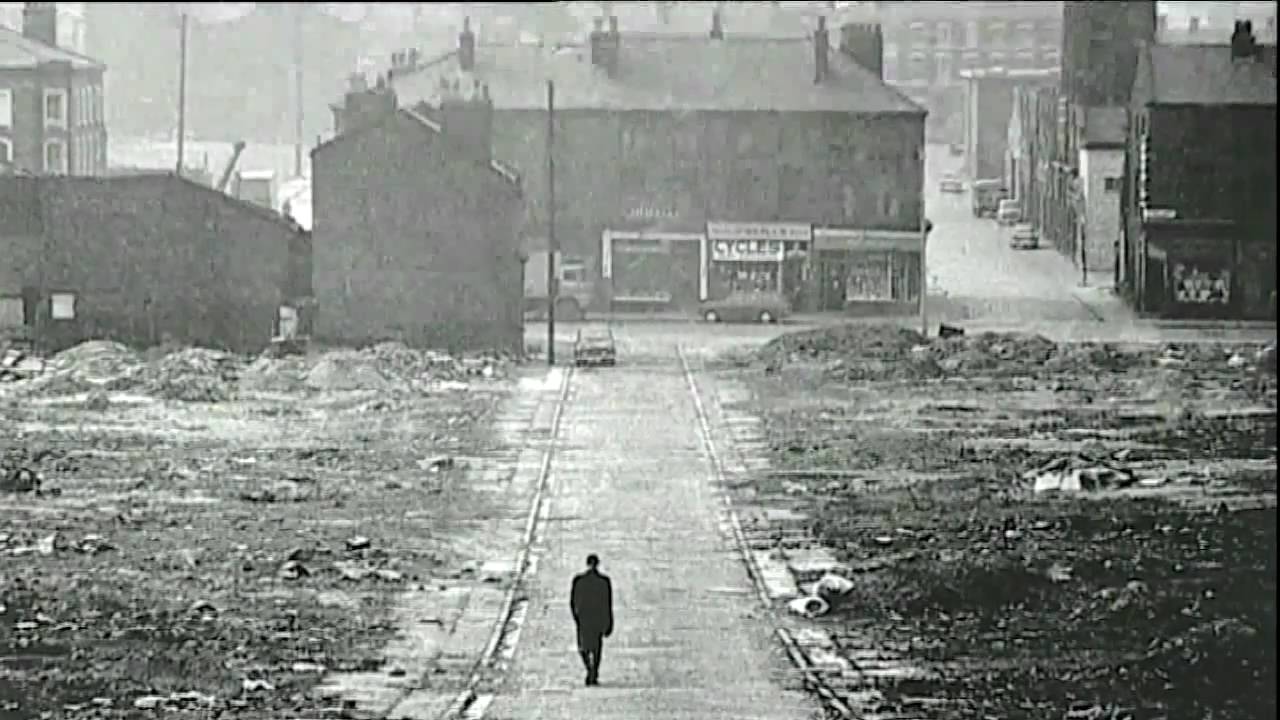 There is something mysterious about Terence Davies’s Liverpool from the outset: at the heart of this cinematic meditation on the city, released in 2008, lies a tension between urban change as a process that is brutal and unremitting and the persistence of memory as something that is delicate and filamentary. Memories become maps through places to which we can never return in a world that is changing all about us.

In Of time and the city Davies presents us with a wondrously idiosyncratic and elegiac journey that is filled with anger, joy and despair. Davies becomes the “angel of history” hovering over Liverpool, alternately caressing his troubled city or pouring scorn on the forces that have brought the city to its knees. The film is punctuated by quotes from poetry, literature and philosophy that are narrated to us by Davies with a sense of staccato urgency: poignant lines chosen from Chekhov, Engels, Joyce and others inform us that this is a serious film from the outset. This is not a film that panders to an existing audience but one that seeks to create a new one. Davies is not making a pitch to our touristic curiosity nor is he using the city in a narrowly didactic sense. This is a deeply personal mode of documentary film making that is imbued with a profound sense of emotional intimacy.

Like Pier Paolo Pasolini’s The Gospel according to St. Matthew [Il Vangelo Secondo Mateo], released to general amazement in 1964, Davies uses music to sublime effect. Both Pasolini and Davies select music that through its apparent incongruity generates a powerful sense of authenticity and immediacy: faces, images and landscapes are dramatically transformed into far more than their mere physical presence as stones, bricks or flesh. In Of time and the city Davies furiously juxtaposes music and place to transcend the petty cruelties of organized religion or the grinding toil of working-class life. Decaying housing estates are set to Bacarisse; cranes and industrial architecture to Mahler.

Davies reserves his real scorn for the British establishment in all their ineptitude and mean-spirited mediocrity. He exposes the flummery and sexual hypocrisy of organized religion with relish. He excoriates the monarchy and other archaic forms of gluttony that feast on the goodwill of ordinary folk. As we see newsreel footage of the royal marriage — “Betty and Phil with a thousand flunkeys” — and the gilded carriage passes through cheering crowds Davies reminds us that “Britain had some of the worst slums in Europe”. His droll disdain for the establishment is also extended to its would-be cultural assassins such as The Beatles who are rendered little more than a ghostly and ironic presence. Just as Joe Strummer rejected “phoney Beatlemania” back in 1977 Davies now derides the “fab four” as looking like “a firm of provincial solicitors” — “yeah, yeah, yeah” indeed.

As for post-war architecture Davies notes with acerbic understatement that “Municipal architecture, dispiriting at the best of times, but when combined with the British genius for creating the dismal, makes for a cityscape that is anything but elysian”. These would-be utopias had by the early 1970s become spaces of decline and emptiness scattered with broken glass and overlooked by boarded-up windows. Instead of utopia we got a city in a state of retraction and disorder. “We hoped for paradise; we got the anus mundi”. These new architectural forms were often poorly constructed and maintained, displaying but a faint echo of their exemplary prototypes in European cities and containing their own versions of built-in senescence to match the social and political neglect of their new occupants.

Liverpool has been the traumatized epicentre of Britain’s full-scale industrial decline since the 1960s with a greater population loss than almost any other British city. Unlike former industrial cities in Europe such as Hamburg or Milan, which have successfully rebuilt themselves, it is apparent that Liverpool’s contemporary renaissance is slender indeed: not a replenished civil society or newfound industrial acumen but a retail desert populated by gaggles of drunken figures tottering around beneath the glare of streetlights and security cameras.

The final tracking shots of gentrified docks and warehouses evoke a sense of placelessness: these waterside developments with their familiar “brandscapes” could be any one of a number re-fashioned industrial waterfronts from Baltimore to Buenos Aires. “As we grow older,” observes Davies, “the world becomes stranger, the pattern more complicated…and now I’m an alien in my own land”. We float with Davies across neon-lit landscapes or hover over boutiques and wine bars that were once factories or churches. At the close of the film we encounter Liverpool “gathered in at gloaming”, a myriad of strange illuminations in the failing light. What has Liverpool been? What have we been?

Beautiful and scathing in equal measure Of time and the city must surely rank as one of the best films about a British city that has ever been made. But the film is not simply about Liverpool: it is also a mordant response to the failures and disappointments of post-war Britain and a bittersweet exploration of the delicate connections between memory and place that anchor our sense of individual and collective identity amidst the tumult of historical change.