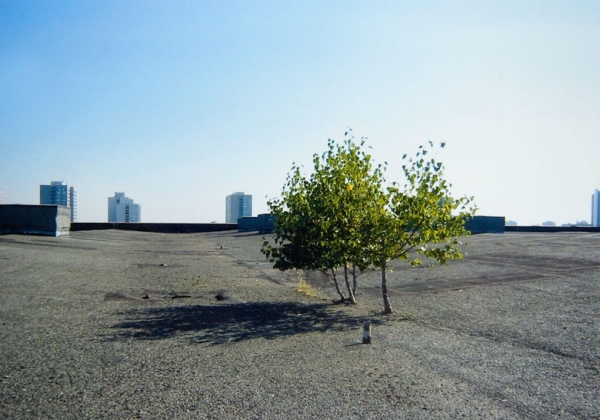 On 4 April 2006 the demolition of Berlin’s Palast der Republik was halted for one day. The artist Ulrike Mohr was to be allowed to undertake a systematic botanical survey of the trees and other plants that had colonized the roof since German reunification. This vast public building had fallen into a state of disrepair since the early 1990s and had become a kind of ecological laboratory for the study of urban change. Small fissures in the concrete and bitumen had allowed an accumulation of organic matter, and in addition to the typical adventitious species of plants one might encounter growing out of cracks in roads or pavements there were now well-established trees such as birch, poplar and sallow, indicative of the early stages of a rooftop forest in formation.

Mohr’s investigation of the ecological consequences of urban entropy entitled Restgrün [Remaining green] raises important questions about the intersection between science and aesthetics. The study of abandoned spaces is not just a question of aesthetic curiosity but also holds significant scientific implications: in the case of Restgrün, for example, one of the trees found growing on top of Berlin’s Palast was Populus nigra, which is on the Red List for regionally endangered species.

For the 2002 project Versuchsanordnung Acer Platanoides [Test set-up Acer platanoides] Mohr chose a six-meter-high Spitzahorn, or Norway Maple, Acer platanoides, growing in the Künstlergärten Weimar, and stitched together the tree’s leaves with red thread so that they were unable to fall during the autumn. The entire leaf structure was then carefully removed by crane and put on public display in Mohr’s first solo show at the Kunstverein Hildesheim. With this “ecological interruption” Mohr performed a non-utilitarian intervention in nature: we are invited to reflect on the meaning of nature through its unexpected cultural appropriation so that there is both a temporal and spatial dislocation in a largely unnoticed yet remarkable everyday transformation: the annual shedding of leaves by a maple tree.

This notion of time in nature — referred to in ecological science as “succession” — connects with a fascination with the spontaneous re-arrangement of nature. Mohr plays on the boundary of human intervention in nature in two ways: first, by simply observing nature its meaning and significance change, bringing mundane elements such as a common tree or an assemblage of weeds into a profound form of aesthetic engagement; and second, by simply focusing on one element of nature and performing simple modifications, we contend with the scope and complexity of our relations with nature as an extension of ourselves. In this last sense, Mohr brings her exploration of nature into a historically specific scientific frame: her works connects powerfully with the development of urban ecology in post-war Germany as a form of intricate and passionate engagement with nature in cities. In particular it engages with the diversity of potential biotopes or habitat niches associated with the type of everyday instances of nature that have been largely neglected by mainstream ecological science.

Among the most ambitious of Mohr’s works is the 2003 large-scale tree-planting project 750 Kiefern in militärischer Anordnung/Konversionsgelände Wünsdorf [750 Pines in military formation / Conversion area Wünsdorf ] in which hundreds of pine saplings that had sprouted spontaneously in the parade ground of a former Russian military barracks in Wünsdorf were dug up, measured and replanted. The trees were arranged in five precise formations of 150 trees, with the tallest trees placed at the front of each of the blocks to suggest an ironic confluence of forestry plantations with military discipline. Photographs of the site from above reveal the ambitious scale of the project, and also its spatial accuracy, so that the young trees in combination with their supporting wooden posts resemble a battalion of soldiers standing to attention. This is, above all, a landscape of control: an attempt to regularize nature that connects with the historic purpose of the site as a training ground for military discipline and the exercise of state power. After the completion of the project the site was allowed to revert back to a process of natural succession towards “secondary woodland” so that the work connects both with a sense of ecological time and also historical time since all cultural or institutional forms are temporally limited in their scope.

The tree planting also signals a counterpoint to Joseph Beuys’s mass action entitled 7,000 Eichen [7,000 Oaks], installed between 1982 and 1987 for Documenta 7, where the placing of these trees alongside upright basalt columns was linked with an ecological critique of modernity in the context of pollution-induced Waldsterben [forest death], and also the nascent German green movement with which Beuys was closely involved. What clearly differentiates the work of Mohr from that of Beuys is her rational engagement with urban nature as an arena for cultural discourse rather than a hidden repository for ecological mysticism. It is Mohr’s critical distance from the German romantic tradition that renders her work especially interesting in an international context.

The art of Ulrike Mohr is characterized by an attention to detail: not just the subtle textures of everyday things, but also an attempt to uncover relationships between aesthetics and science, and between past and present. Her interventions break with neo-romanticist associations and are suggestive of a cultural synthesis with nature that is free from the baggage of transcendental meaning. Her interactions with nature and landscape are far removed from the heavy symbolism of some artists (the work of Anselm Kiefer, for example) or the shamanistic utterances of Beuys and his followers. In the work of Mohr we find a subtle irony, that provides new insights not through further layers of mystification, but through a calm insistence on the social production of meaning.