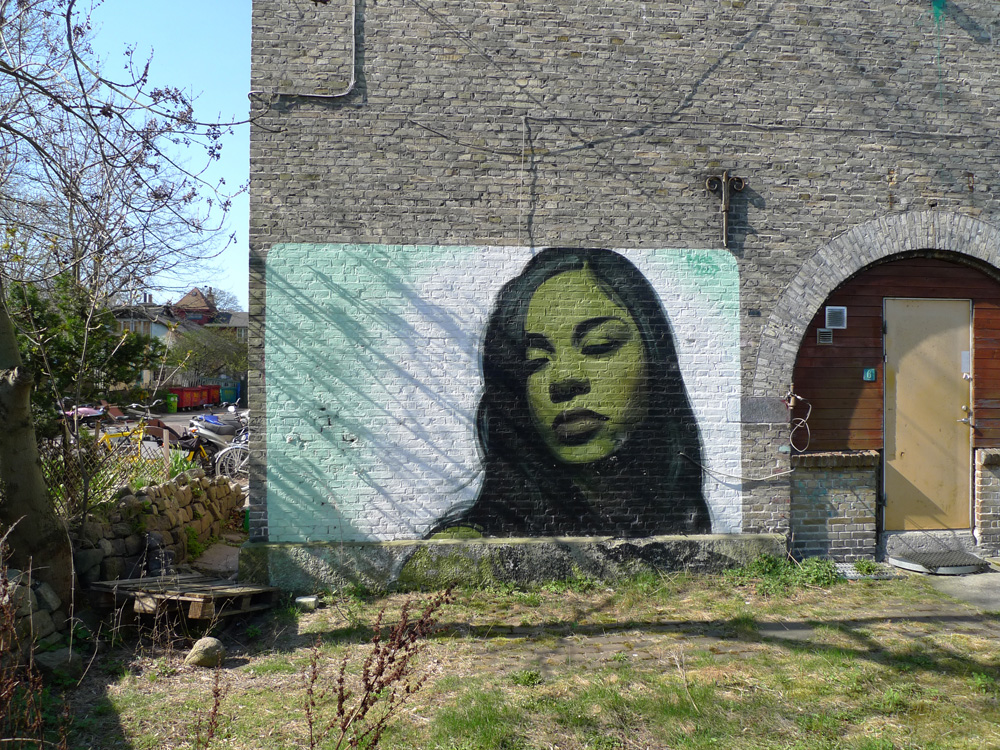 It’s strange to arrive in a city you already “know” yet have never visited. What brought me finally to Copenhagen this week, and to Denmark for the first time, was The Killing [Forbrydelsen], an extraordinary twenty-part TV drama which delves deep into the psyche of its main characters and is played out against a grey November skyline. Like the depiction of Baltimore in The Wire, the portrait of Copenhagen in The Killing explores many elements: the inner landscapes of grief, the spectre of racism, political chicanery, and above all, an emphasis on the complexity of human relationships.

On my first morning in Copenhagen I headed like many other visitors for Christiania, the alternative city within a city, that was established in a cluster of abandoned military buildings in 1971. This alternative community of 500-700 people — with its own decision-making structures — has had a turbulent relationship with the Danish state. A government decision to forcibly remove the settlement in 1975 was rescinded in 1976 following a wave of public sympathy. The commune has repeatedly struggled to prevent outsiders from using the site as a base for drug dealing: their semi-autonomous status being taken advantage of as a safe haven for crime. My first impressions of the rather shabby and commercialized cluster of shops and stalls by the main entrance is that this could be London’s Camden Lock Market. The “real” Christiania lies a further five minutes walk away where prettily decorated self-build homes and small gardens back onto the city’s canals. The urban sociologist Cecilie Juul tells me that the state is now trying to win their battle with Christiania by stealth: instead of taking the land by force they now propose to sell properties directly to their residents. Such a move undermines the possibility for shared ownership and will lead to a gradual “normalization” of property relations. As the original settlers from the 1970s die or move away the differences between this enclave and the rest of city will eventually fade away.

To the west of the city centre there is an interesting park called Ørstedsparken: the varied and naturalistic topography is reminiscent of Alphand’s Buttes-Chaumont or “the ramble” of Olmsted and Vaux’s Central Park. At the centre of the park is a lake encircled by fine trees and statues of mythical figures. The Ørstedsparken is interesting because it marks a changed relationship between the state and gay men: the role of the police has changed from that of harassment or entrapment to the protection of park users from homophobic violence. This is interesting because it underlies the “right to the city” in an inclusive way that signals an enlarged conception of the public realm as a shared space that encompasses many different interests. If the Ørstedsparken really is a heterotopia for sexual subcultures, in the Foucauldian sense of radical difference and social experimentation, then does the state’s role in protecting the park as “a space of difference” suggest a more complex relationship between “inside” and “outside” in contemporary societies?

A short distance north of Copenhagen lies the Louisiana gallery and sculpture garden. Clearly in an “art mood” as I waited for my train in the city’s central station I noticed that some fluorescent lighting on the station platform resembled a Dan Flavin installation. Louisiana is just a few minutes walk from the small town of Humlebæk and enjoys a perfect location next to the sea. How beautiful to see all these sculptures outside, nestled among trees, and within earshot of the waves below; each small clearing in the park brings surprises, every detour something different. Works by Jean Arp, Louise Bourgeois, Henry Moore and many others are gathered together in this magnificent setting. To see sculpture in this way is a remarkable experience that plays on all our senses and where distinctions between architecture, landscape and sculpture melt away.