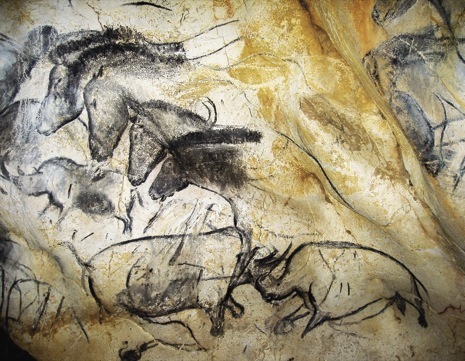 Werner Herzog’s latest film is a documentary about the Chauvet-Pont-d’Arc Cave in the Ardèche region of southern France. The cave, first discovered in 1994, contains what are believed to be the oldest human paintings ever found, dating from over 30,000 years ago. The walls of the cave are festooned with intricate depictions of animals that would have roamed the glaciated landscapes of southern Europe at the time including bison, horses, lions, mammoths and rhinoceroses.

The film is visually spectacular, not least through the adoption of 3D technology to enhance the contours of the cave walls. The excellent cinematography enables us to look very closely at the remarkably preserved paintings along with the strange accretions of crystals and other geological features. The overall aesthetic effect is at times, however, rather bombastic or even operatic: Herzog’s own commentary begins to occlude the archaeological insights so that the documentary ends up being more about him than the cave itself.

Herzog’s work is marked by a tendency towards cinematic machismo. In one above-ground scene he mocks the spear-throwing ability of an archeologist that would have been no match for his distant ancestors (we can infer that Herzog rather fancied his chances of survival in the Paleolithic era). His mode of interviewing is marked by the use of leading questions — perhaps to a greater extent here than in his earlier documentaries — as he steers assembled scientists towards more speculative and metaphysical themes. The paintings, intones Herzog, represent nothing less than the origins of the human soul.

The film is also marred by an idiotic postscript featuring albino crocodiles inhabiting a giant greenhouse that uses waste water from a nearby nuclear power plant. With this final lapse into self parody — we also meet some of Herzog’s beloved reptiles in his recent “remake” of Abel Ferrara’s Bad Lieutenant — the documentary seems to lose its way and we are left with the director’s rambling insights into the human condition.